Curatorially, the exhibit presents artifacts/content through the narrative that these relics and data bits have been collected by a race of mysterious aliens that have been traveling the universe (and time itself) on a peaceful explorative mission of information gathering. Visitors are seeing this collection of artifacts by exploring the alien's spaceship, the Space Ark. Artifacts are presented in groupings by their planet of origin (hence Infinite Worlds).

Aesthetically/environmentally, the gallery space (designed by Eli Stillson) strives to create a sense of place for the visitors which is, in this case, an alien spacecraft. The vibe is much darker and moodier that the previous sci-fi exhibit, taking inspiration from the concept art by Syd Mead for Alien and Blade Runner.

Following this notion of the gallery being an alien spacecraft, the graphics serve to reinforce this idea by looking like they are part of the ship rather than panels in a museum. Many of the graphics are backlit, giving them an attention-grabbing punch as well as increasing legibility in the dark space. Screens for touch-screen interactives are meant to look like that are all part of the same alien computer system; exotic yet familiar and navigable.

EXHIBIT LOGO
The logo development process at EMP Museum involves a number of in-house designers submitting concepts. This was my final submission and while it didn't make the cut, I am still pleased with it.

ALIEN ALPHABET
In line with the curatorial metaphor of the exhibit being on an alien spaceship, I created a fictional 'typeface' to give the space and graphics a bit more of an alien/exotic feeling. It is a fully functional typeface and shows up on the majority of the exhibit graphics in the form of fun 'Easter Eggs' that visitors can decode to discover nods to the films/series.

EXHIBIT GRAPHICS
The exhibit graphics (primaries, citations, title panels, etc.) were designed to work with the alien ship metaphor. Both of these graphic types were backlit in their final iteration, which helps them pop in the dark moody space. The large Robot Design, Spaceship Design and Alien Morphology infographics contained 3- printed models of selected content points. And yes, that's George Takei below, checking out the exhibit before it opened to the public! 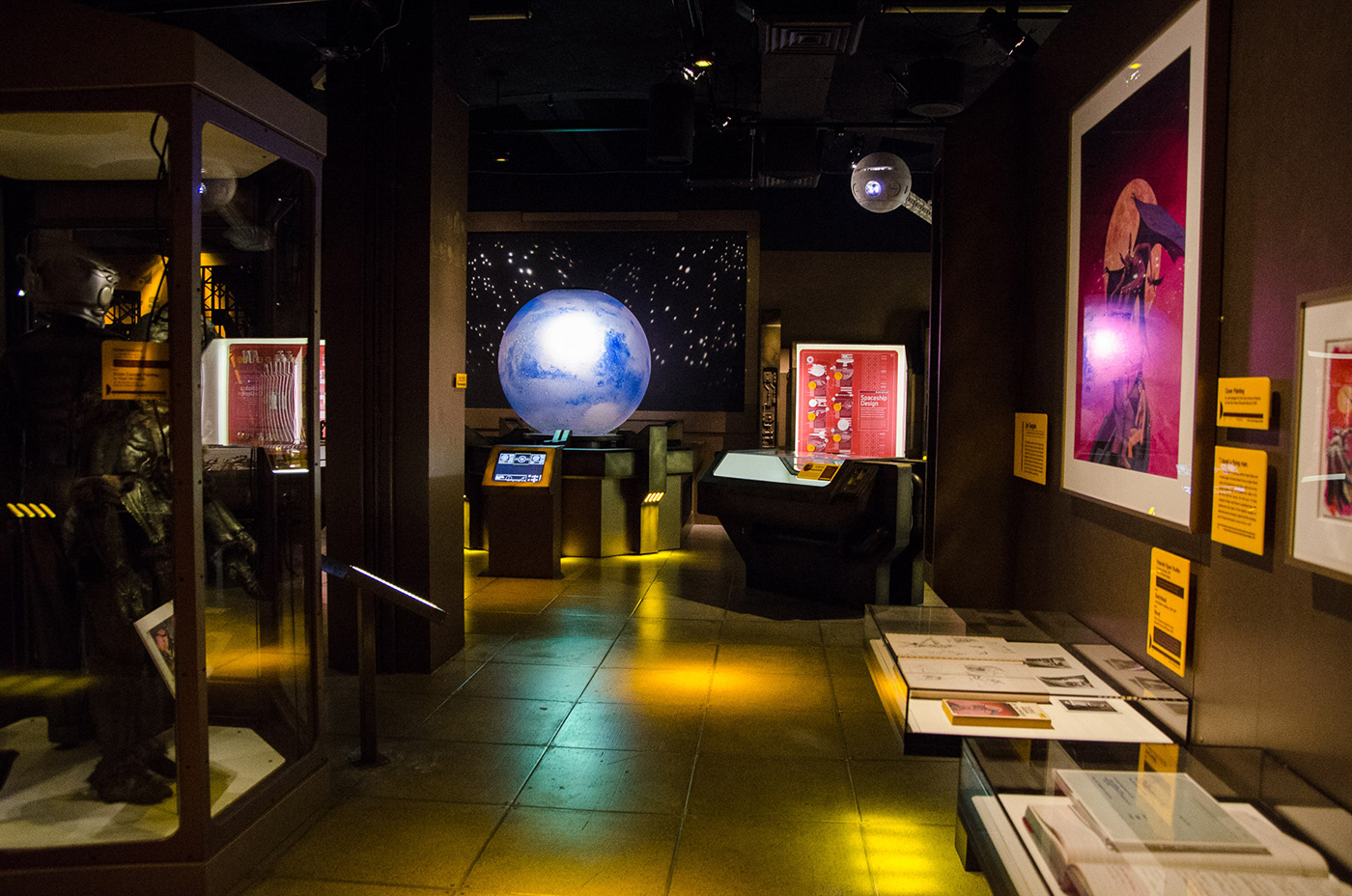 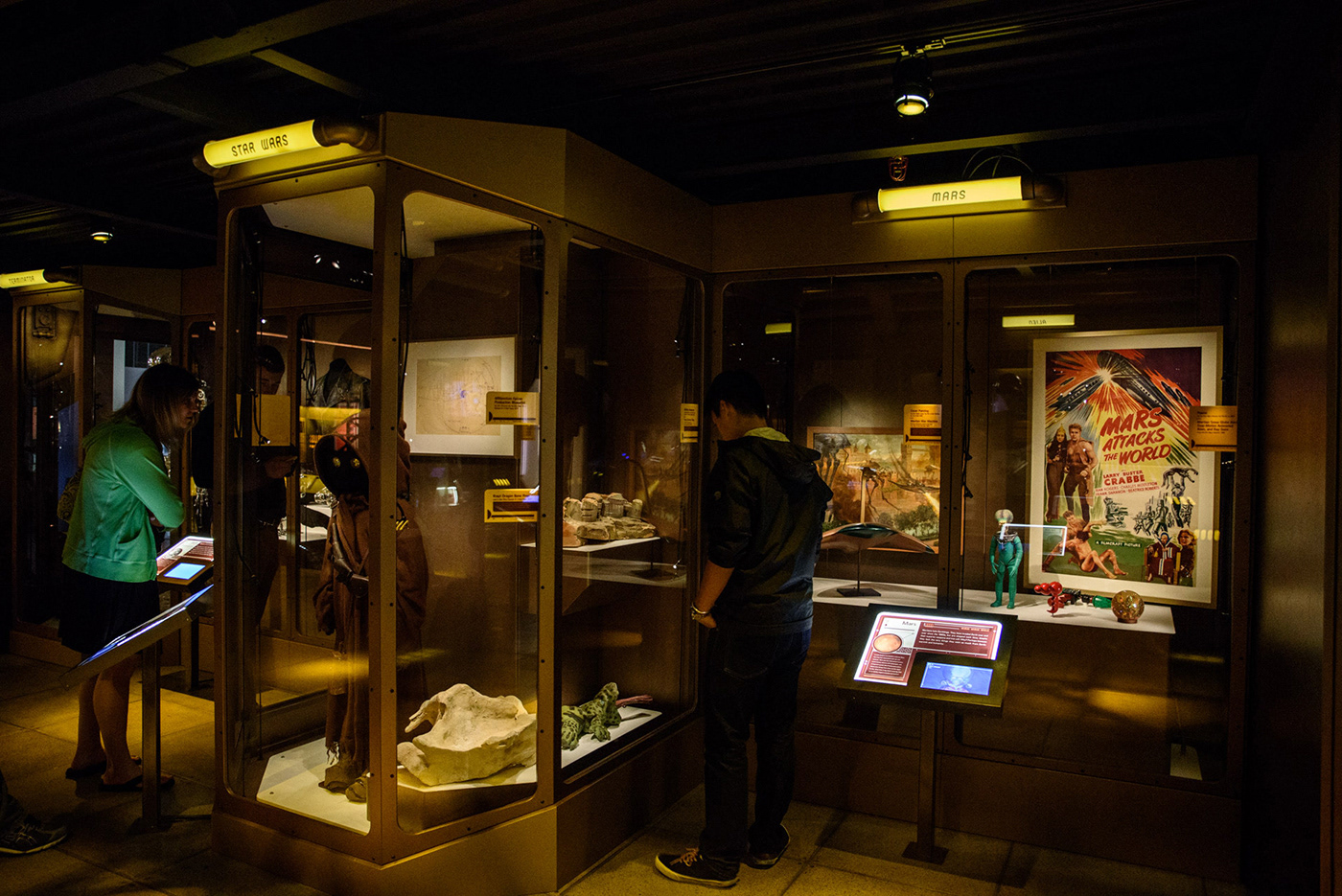 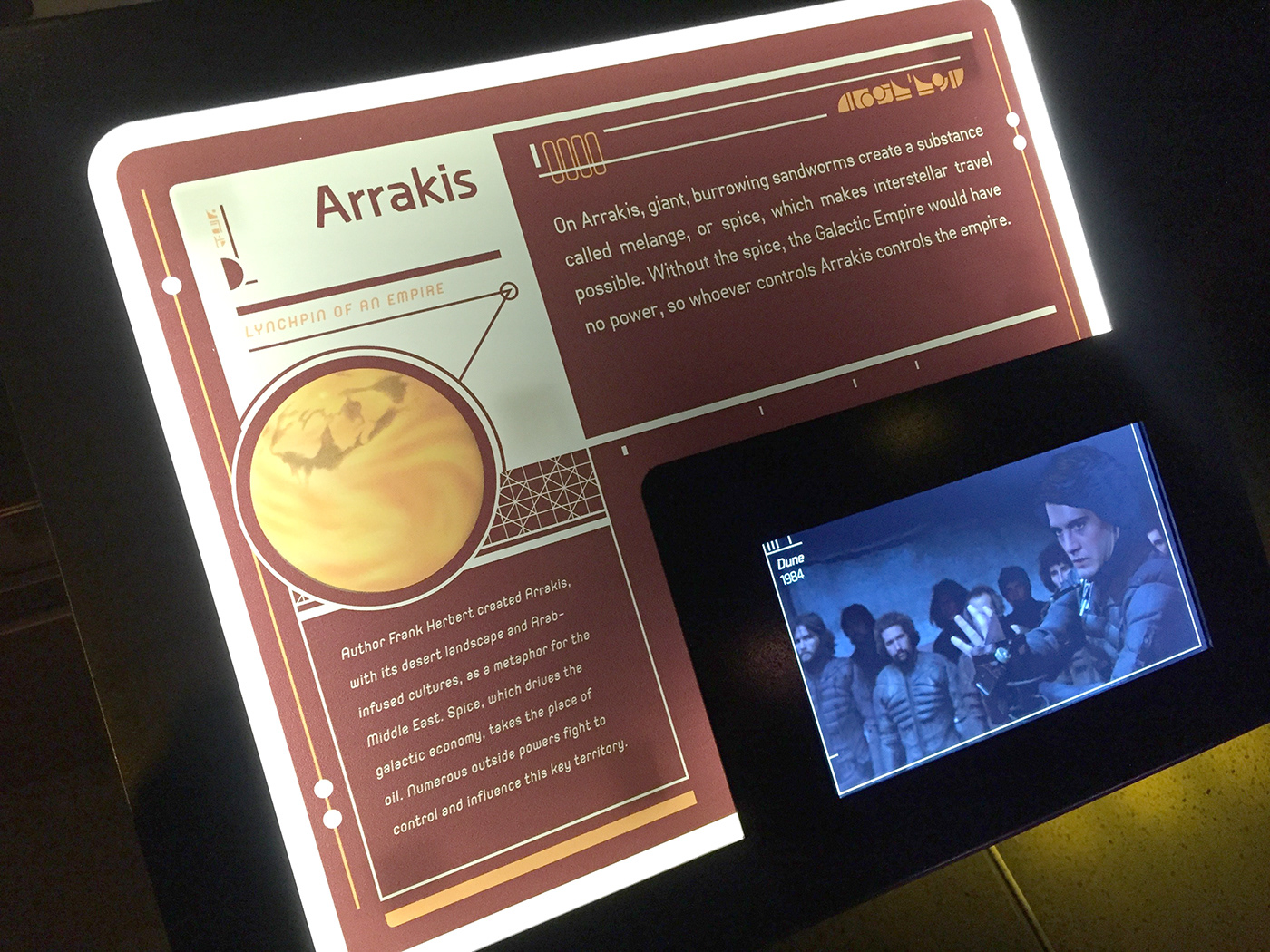 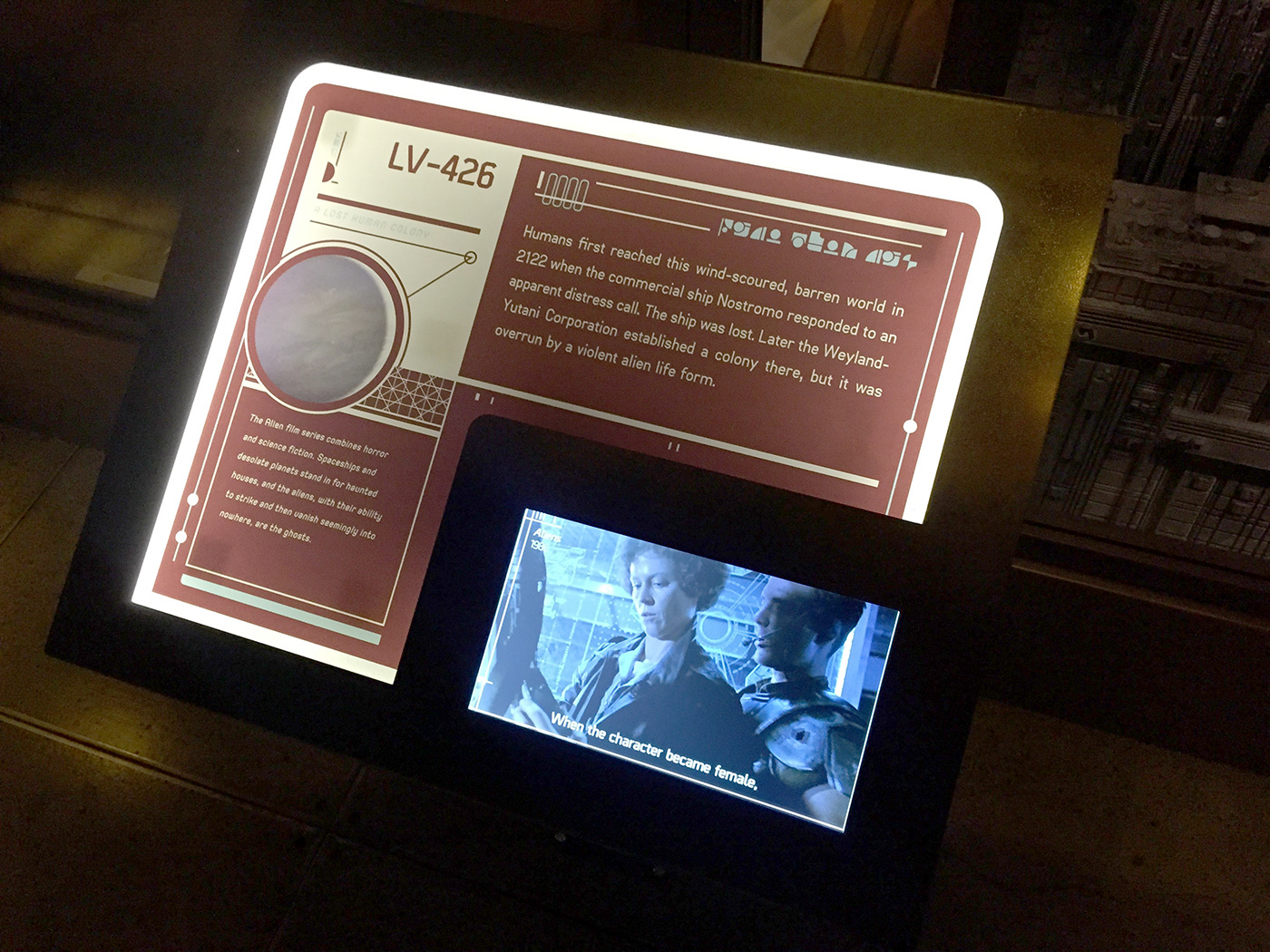 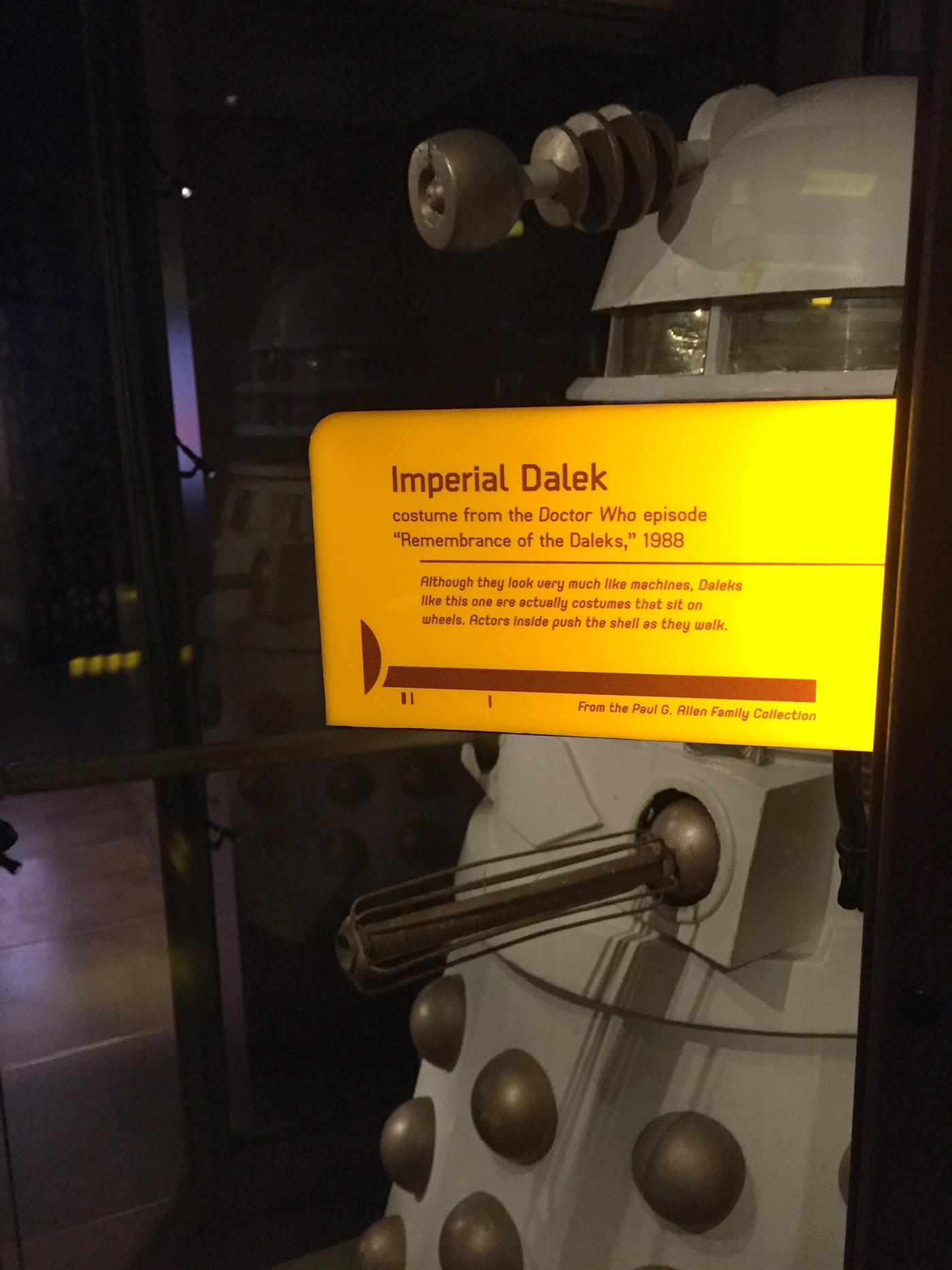 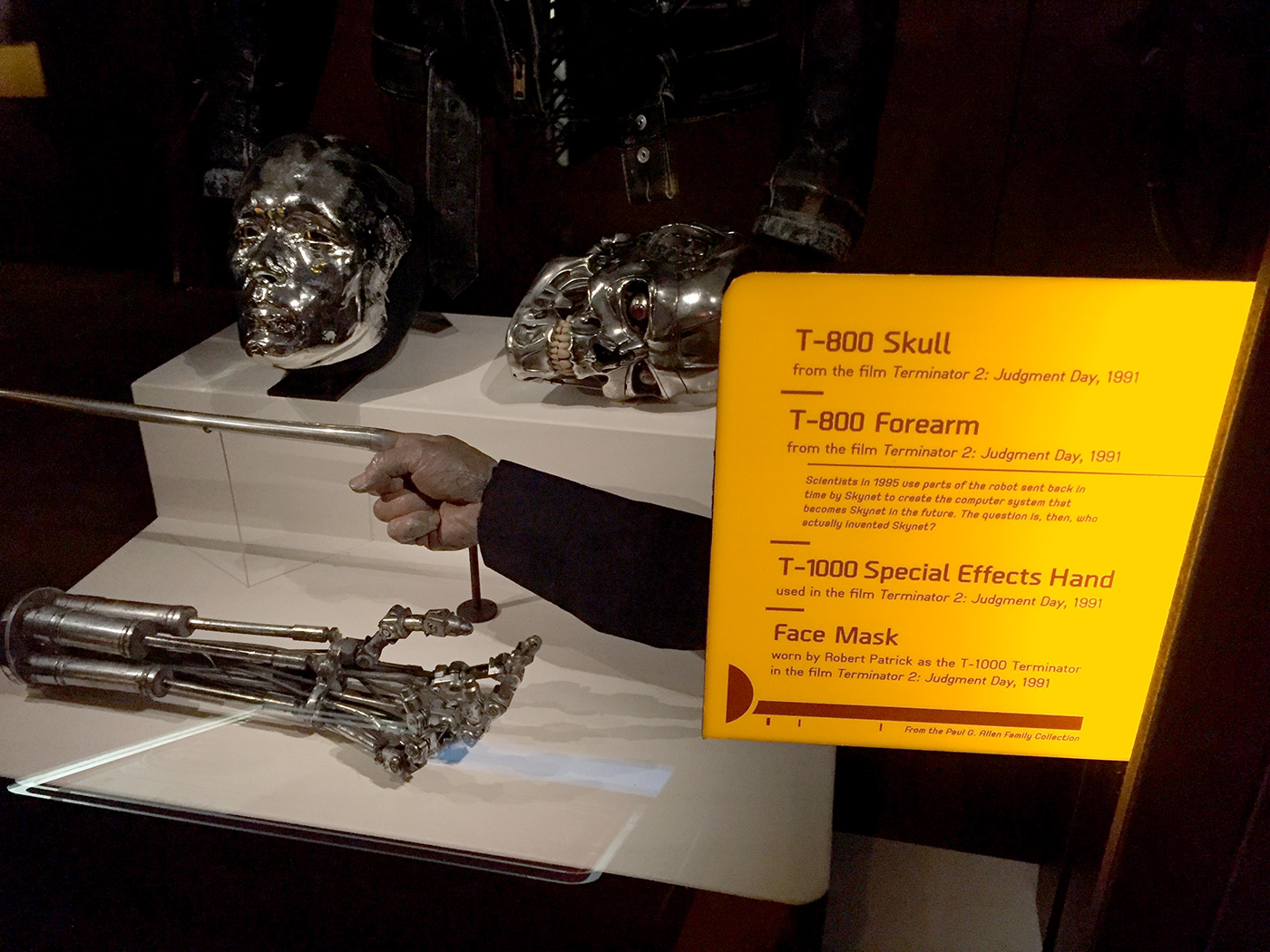 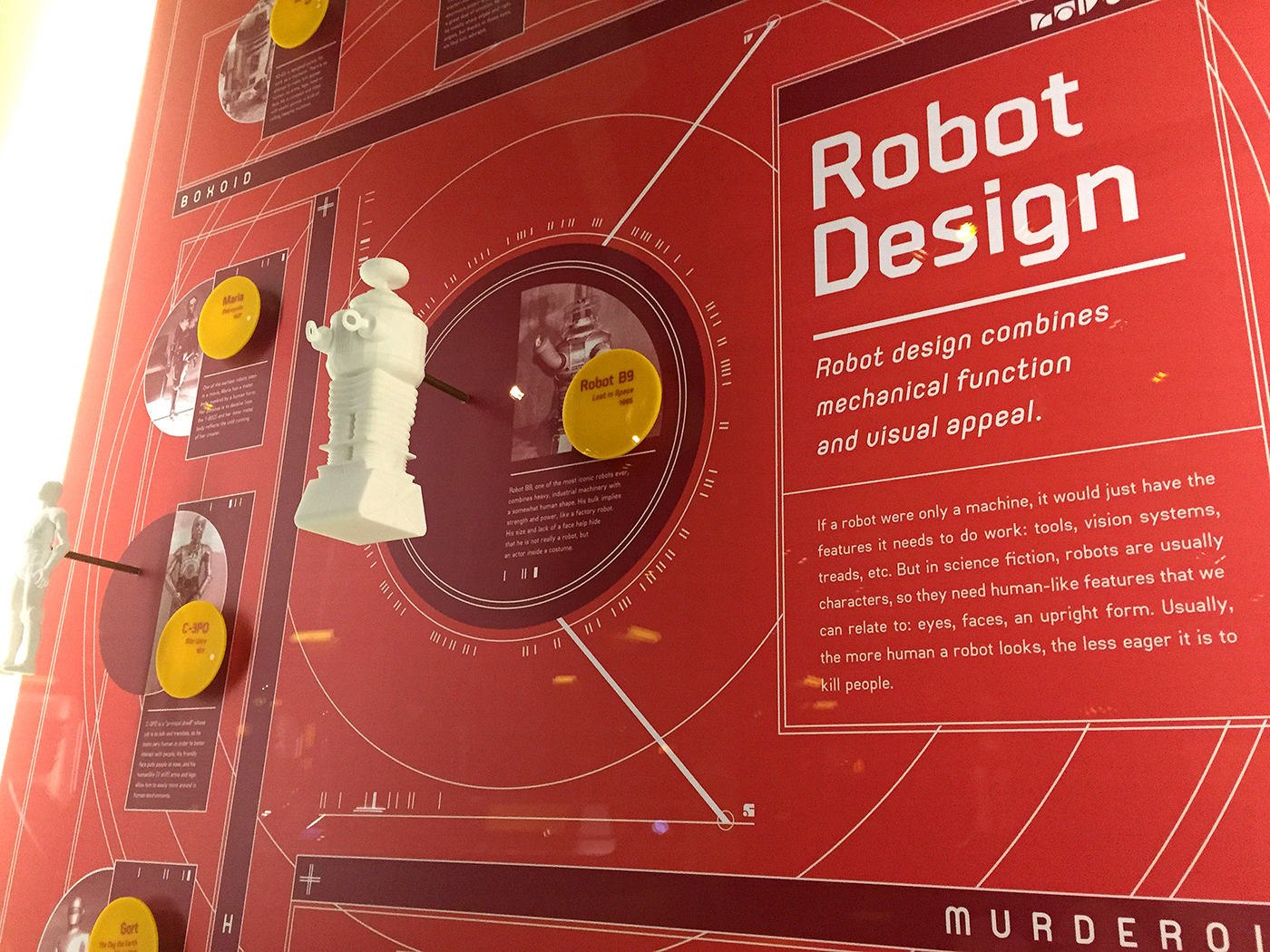 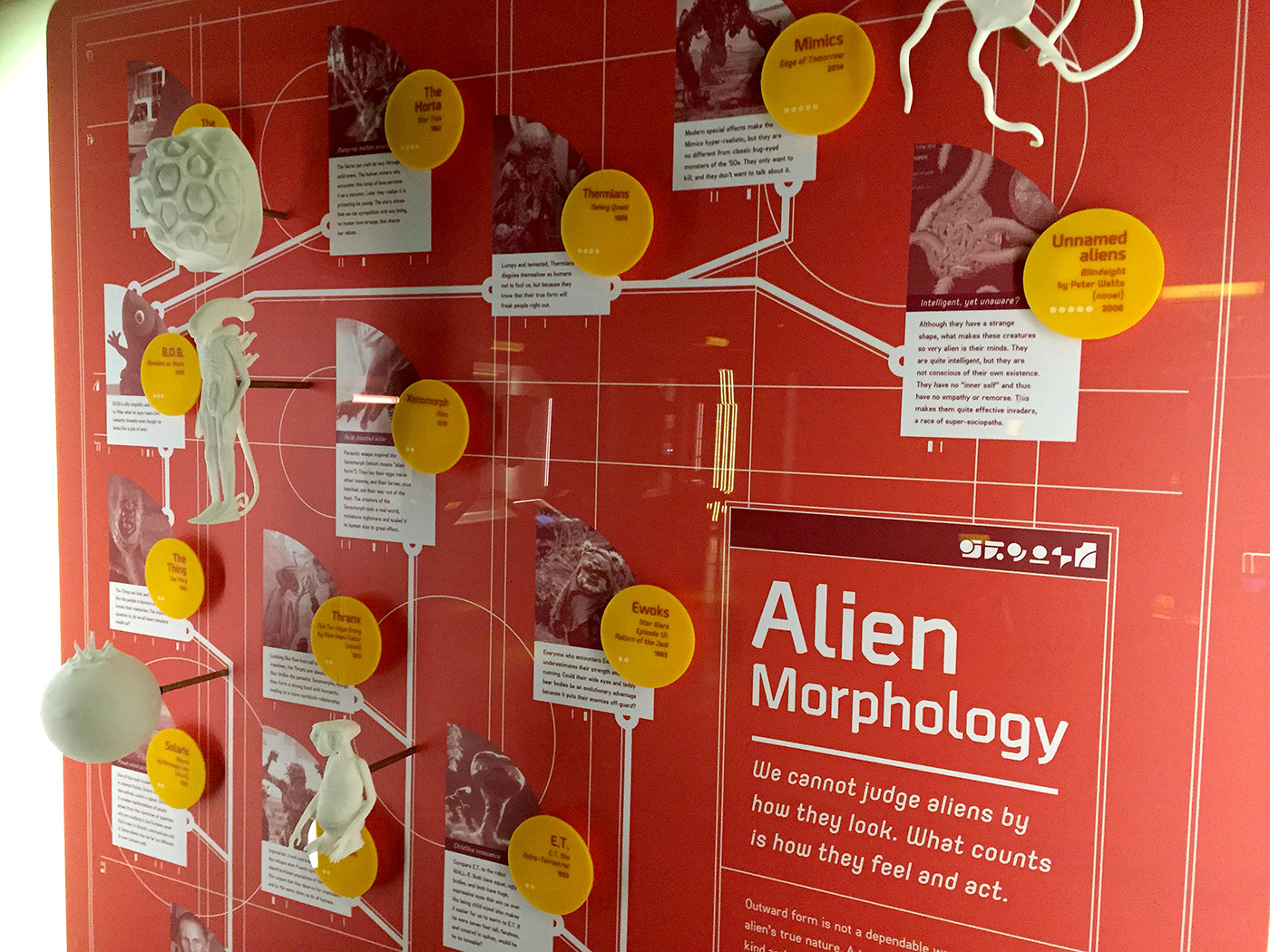 AMBIENT SCREEN GRAPHICS
A number of screens in the exhibit space have ambient motion graphics in the form of nonsensical info screens. Again, this is intended to enhance the alien ship metaphor for visitors. 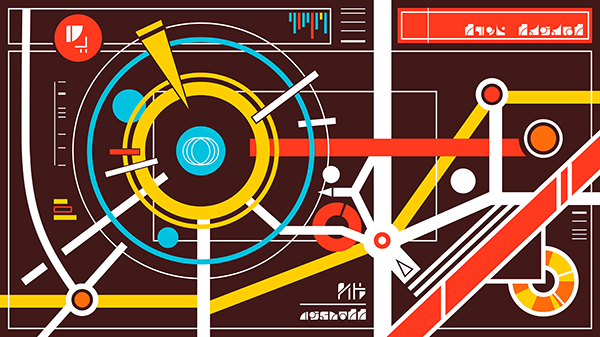 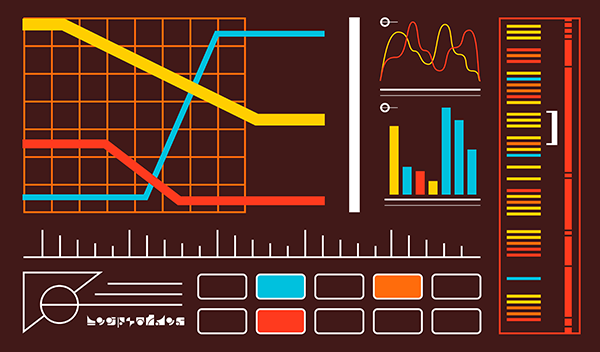 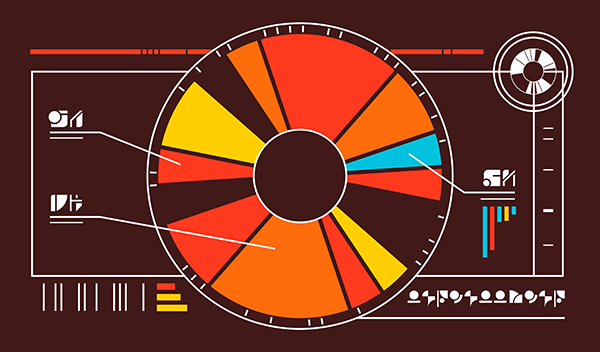 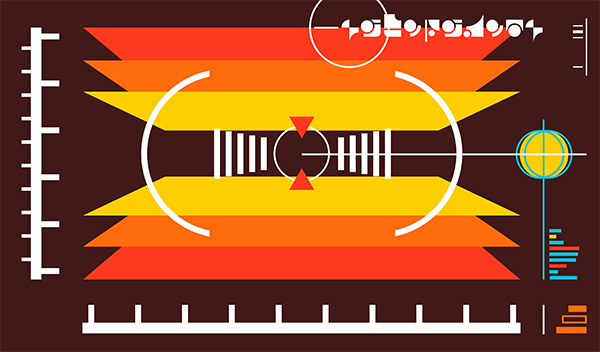 SCOUTSHIP PHOTO OP INTERACTIVE
An imagining of a spaceship bridge gives visitors and opportunity to explore the galaxy for planets/suns/asteroids and to document their findings in a photo with their 'crew.' The touch-screen interactive guides visitors through this experience. Below are a few screens I designed for the experience. 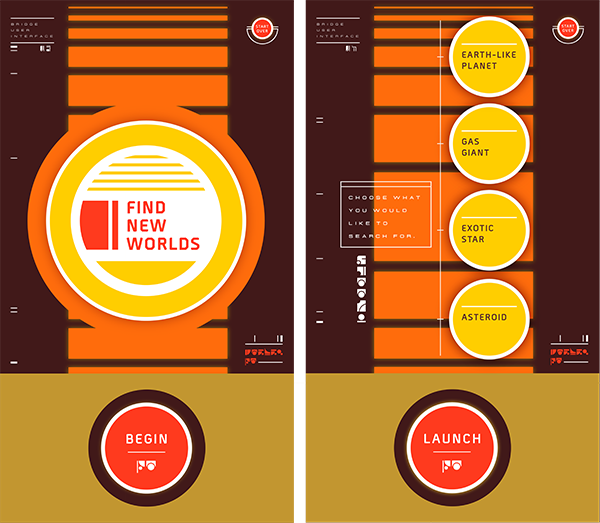 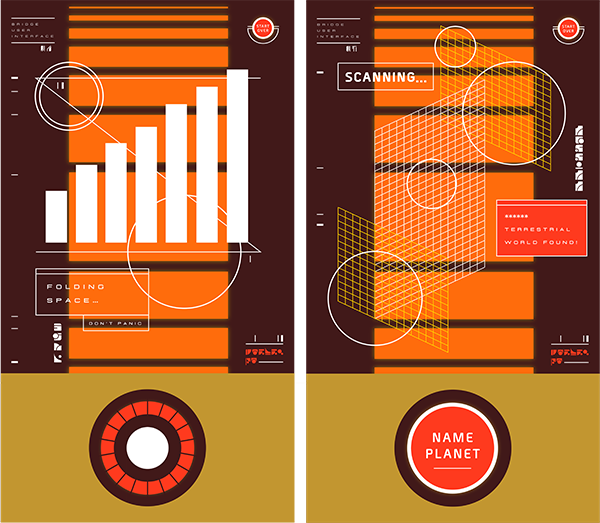 GUN CASES DIGITAL CITATION
Due to the density of artifacts, the gun cases section of the gallery presented a challenge to the delivery of information and media. Our solution was to create a simple touch screen interactive that allows visitors to peruse the info available for each artifact. A sample of screens I designed for the experience follows below. 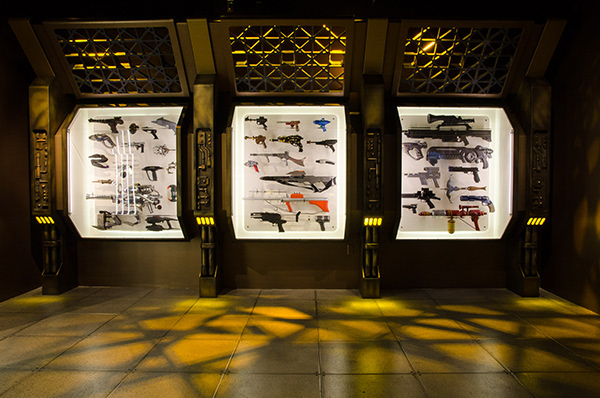 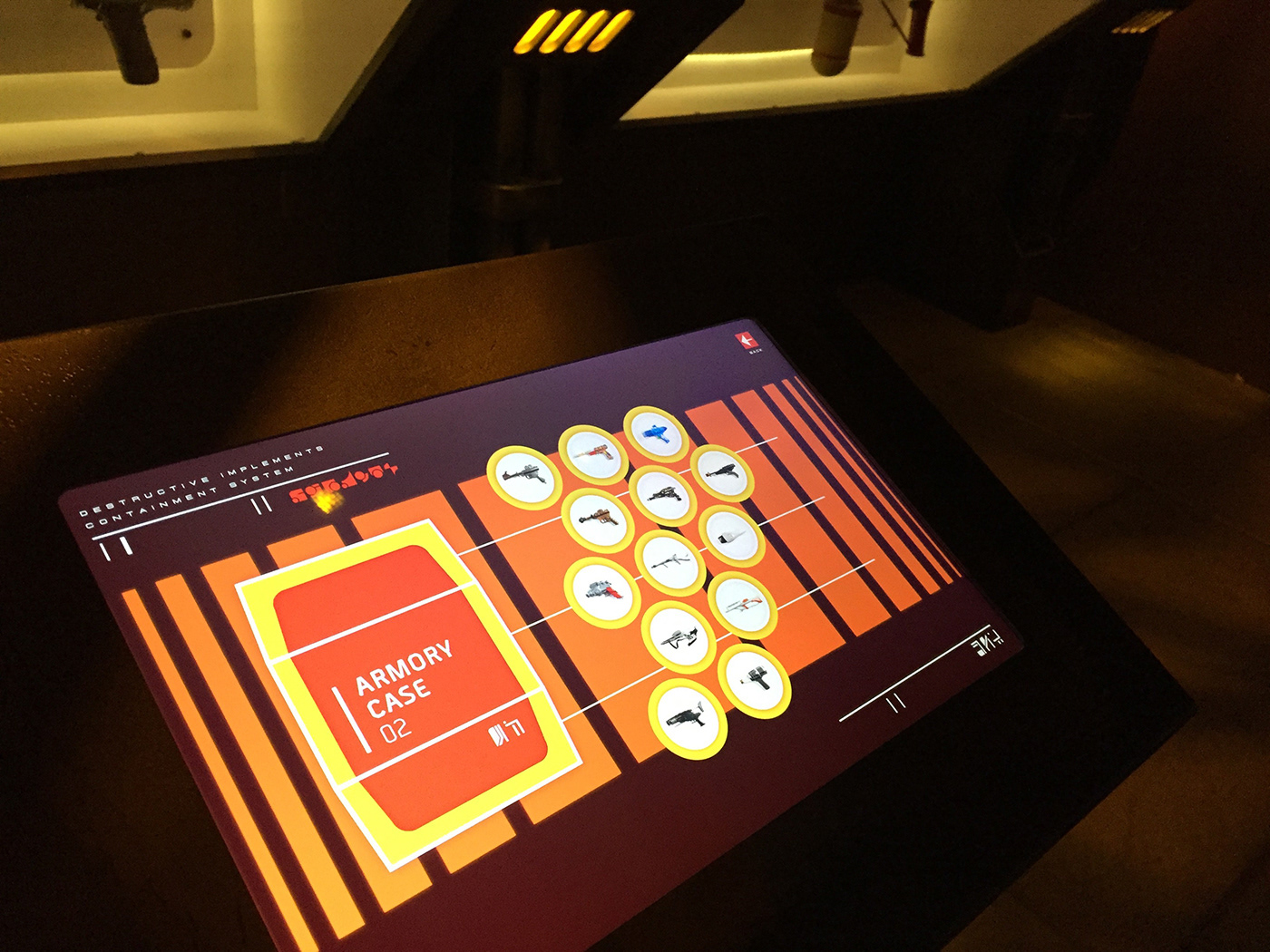 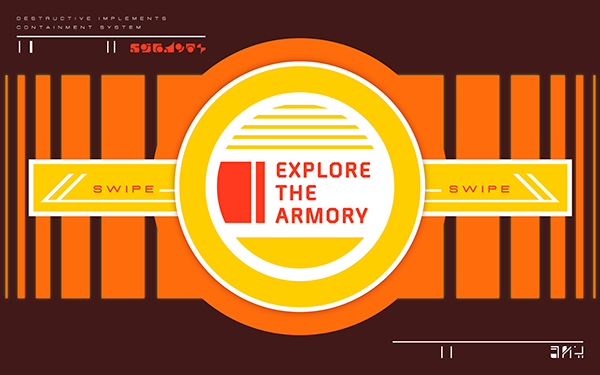 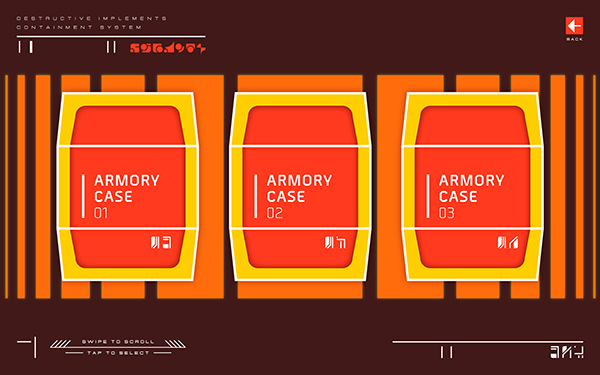 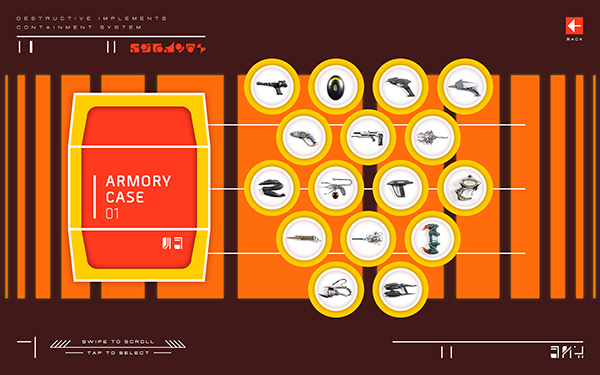 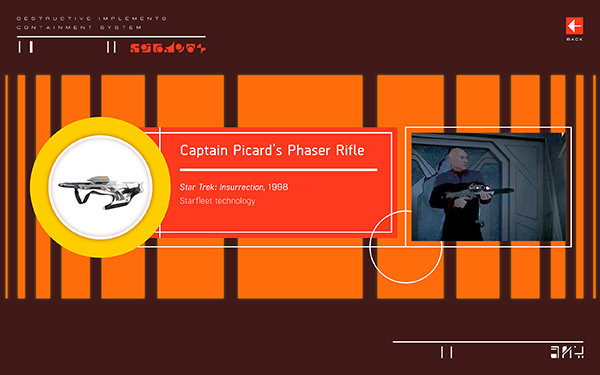 ROGUES GALLERY DIGITAL DATABASE
The Rogues Gallery is a digital database of Sci-Fi villains. Presented as large touchscreen interactives, the Rogues Gallery allows visitors to explore a number of these famous entities from films/series. A sampling of screens I designed for the experience follows below.

OMNIGLOBE GUI
For the exhibit, the exhibits department purchased a globe projection hardware/software product called OmniGlobe. To help this interactive fit within the visual aesthetic of the alien spaceship, I redesigned the GUI for the software as shown below.